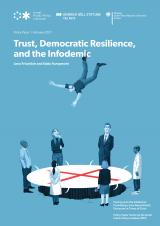 Trust, Democratic Resilience, and the Infodemic 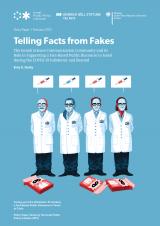 Israel is famous for scientific research and technological innovation. However, when it comes to science communications, Israel is behind other countries. The COVID-19 pandemic additionally exposed a confidence crisis between the public and the scientific community. How can we bolster public trust in science and effectively battle the infodemic? 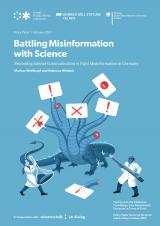 Misinformation and conspiracy myths pose a huge challenge to science and science communication as well as to an effective tackling of a global health crisis. This paper takes a closer look at the German response to the pandemic with a focus on trust in science, government’s measures and the spread of conspiracy myths. 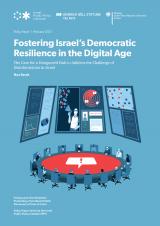 Disinformation has become a widespread phenomenon in recent years, reaching a peak in attention during the COVID-19 pandemic. Which protective mechanisms against the viral spread of misinformation are needed in Israel and around the world? 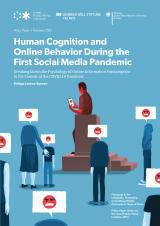 The Covid-19 pandemic has flooded global information platforms with an unprecedented amount of information. How can we increase resilience to misinformation and manipulation in response to crises, and the flood of information they engender?

Had there not been so many political storylines in the news avalanche ahead of Israel’s second general election in 2019, one might have been inclined to see it as Israel’s Prime Minister Benjamin Netanyahu last straw: On September 3, two weeks before the voters again went to the polling stations, Netanyahu went public with the allegation that had it not been for widespread voter fraud in Israeli-Arab communities in the April election, his right-wing coalition would have passed the 61-seat threshold needed to gain a majority in the Knesset.
By Henning Christian Lahmann

Corruption Eruption and the Future of Democracy in Israel

"You have hurt the image of public service and public faith in it. You acted in a conflict of interests, you abused your authority while taking into account other considerations that relate to your personal interests and the interests of your family. You corrupted public servants working under you." These statements encapsulate the allegations in the severe draft of charge – or charge pending hearing – the Israeli attorney general sent Israeli Prime Minister, Benjamin Netanyahu on February 27, 2019.
By Doron Navot

"Panic Wins" reads the headline of Germany's leading political magazine Spiegel. The paper summarizes Israel's election campaign and its spectacular outcome as follows: For some time it looked as if the election campaign concentrated on social issues, but then Netanyahu's short-term strategy began to work. At the ballot-box, most Israelis shared one sentiment with their prime minister – fear.
By Oz Aruch

Which Country Do We Write About? The Impact of Media in Times of War

The Israeli branch of HBS, with its headquarters in Berlin and its self-definition as “an intellectually open, civic organization”, is currently running a series of events under the title “Jerusalem Talks”. The aim of these events is to foster discussion about different perspectives on Israel and the Occupied Palestinian Territories and their relationship with Europe, especially Germany. This particular event – the second in the series – took the role of the media during war time as its primary focus. This article was first published on the blog of the Palestine-Israel Journal website
By Dominic Davies