According to an ambitious initiative launched by some of Europe's largest companies, the Sahara will become a power hub to provide renewable energy to Europe by the mid of the century. This project should become a cornerstone of a new European Community for renewable energies. By Ralf Fücks, Co-President of the Heinrich Böll Stiftung

Nuclear Power is not an alternative!

The controversy about the use of nuclear power continues. In connection with the debate about climate change and what can be done about it, the nuclear industry and political forces that support it have undertaken efforts to present the use of nuclear power as a means of combatting climate change. The Heinrich Boell Foundation has published a paper “Nuclear Power – Myth and Reality” as early as February 2006, which argues against this notion. The heated debate has recently become more evident also in Israel. In the Israeli newspaper Haaretz from August 7, 2009, Gal Luft demanded a serious debate on the use of nuclear energy in Israel, while practically proposing its use. Joern Boehme, the director of the Israel office answered the claims made by Gal Luft concerning the debate in Germany in a letter to the editor, published in Haaretz on August 18, 2009. Read the op-ed by Gal Luft followed by the response letter by Joern Boehme»

The Heinrich Boell Stiftung has defined the issue of climate change and sustainable development as being central to its work internationally, both in the areas of mitigation and adaptation. It advocates and advances an agenda for development rights for developing nations and contributes to seeking solutions in many international forums while at the same time, adapts its work to the specific context of each of its 28 offices around the world.

Environmental issues have always been of central importance to the Greens and to the Heinrich Boell Stiftung. Equally important, has been the connections and links made to social and economic issues, creating a holistic vision of society and sustainability. Our work therefore in Israel focuses on climate and energy policy, green economy and smart growth, urban resilience and sustainable communities. We and our partners work with decision makers on the local and national levels in the areas of advocacy, policy development, capacity building and environmental innovation. The foundation supports a variety of Israeli environmental and social organizations, which over the last decade, strive to have a growing impact on policy and society. For more information please contact Elisheva Gilad: Elisheva.Gilad@il.boell.org

Resource Politics for a Fair Future

How could a just and democratic resource politics look like that respects both planetary boundaries and human rights? The Memorandum “Resource Politics for a Fair Future” is the outcome of a two-year international dialogue process of the Heinrich Böll Foundation. 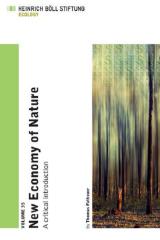 From climate change to ecosystem degradation – the solution to these problems could re-side in an economic “valuation” of nature and its services. But can that really give nature any better protection? This publication provides a readily understandable introduction to the subject and illuminates the concepts and instruments that follow from the idea of valuing nature. 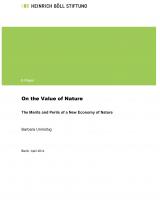 On the Value of Nature

The value of nature and its “services” should not only be cherished and given greater visibility as elements of the economy, but should be assigned a monetary value in order to protect them. That is the new mantra. Although the idea is becoming more popular it is also highly contentious, argues Barbara Unmüßig. 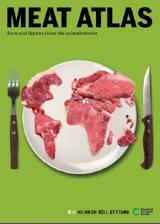 Meat Atlas - Facts and Figures about the Animals we Eat

This publication sheds light on the impacts of meat and dairy production, and aims to catalyse the debate over the need for better, safer and more sustainable food and farming. 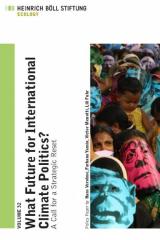